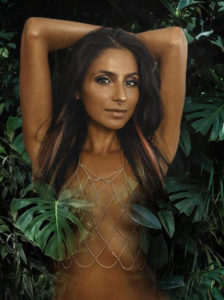 Zain Saraswati Jamal creator of Jungle Radiance, is an internationally renowned Multidimensional Coach, Yogini, Published Writer, and Raw Vegan Food Alchemist.  Zain’s magic lies in the weaving together the most poignant aspects of ancient philosophies of healing such as Meditation, Ayurveda, TCM, Holistic and Athletic Nutrition, Botany and Shamanism with the mystical downloads that she has received over the last decade to craft a direct approach to accelerated evolution for beings who are consciously awake and are no longer responding fully to the ancient systems. Through her own personal awakening journey, Zain spent months at a time in various parts of the Amazon Jungle in the wild, learning sacred gifts of wisdom from the fruits, the bees and sacred plant medicines. During this time, she came into full awareness of her innate supernatural powers and the understanding of what once was a natural state of being for all humans. Her Radiant Ascension processes are divine downloads which offer an individual a direct experience of their own divinity or truth within a few minutes, allowing them to receive new codes; therein, shifting any blockages, stagnancy, illness or enabling full bodied manifestation – and have been coined as ‘a DMT experience without the DMT’.  They serve as a reminder that full-spectrum healing can be achieved instantaneously through choice and the connection to Unconditional Love, the highest frequency.

Zain’s focus is on working with AWAKENED humans who are shifting consciousness on an vast scale through their art or divine offerings. She has worked with thousands of humans worldwide, including internationally renown personalities: artists, actors, musicians, healers, filmmakers, CEO’s of multinational corporations, warriors, tribal leaders, botanists, shamans, medicine men/women, writers, athletes, teachers and light workers from what feels like background and every spiritual upbringing. Her work has been featured in the Huffington Post, CTV, GaiaTV, Oxygen Magazine, Divine Data and she has held workshops, movement classes and retreats at Wanderlust Festival, Bhaktifest, Beloved Festival, Lightening In a Bottle Festival, Blessed Coast Festival and other conscious gatherings in Canada, USA, Europe, India, China, South and Central America.